Previous IdeaNext Idea
TOPICS DISCUSSED:
Architecture
Historic Preservation
Sometimes, if we do our work well as architects, our handiwork is nearly invisible.

At least that can be the case with historic renovation and seismic strengthening projects. Recently we completed the first phase of work on a historic Classical/Romanesque sanctuary in San Francisco’s Upper Fillmore. For more than a century, Congregation Sherith Israel has been worshipping in this building, designed by Albert Pissis and completed in 1905. It’s an eight-sided building with a beautiful dome rising 120 feet above the street, and the interior is decorated with stenciled frescoes and opalescent stained glass windows. After the 1906 earthquake, as one of the few large buildings to suffer minimal damage, it was temporarily pressed into service as the city’s superior court, hosting the graft trial of San Francisco political boss Abe Ruef.

The building survived the 1989 Loma Prieta earthquake unscathed as well. Nevertheless, the city passed a law requiring all unreinforced masonry places of public assembly to meet stringent seismic safety standards, and despite its great track record, Sherith Israel had to comply.

Most folks who pass the building won’t know anything was changed.

The building’s exterior also needed attention. Clad in Colusa sandstone, a popular material of the time that is highly porous and susceptible to the elements, it had experienced considerable delamination. At some point in the late 1950s, the building had been painted a salmon color, probably to cover patching work. What was not known in the 1950s was that paint would only accelerate the deterioration of the sandstone by trapping water beneath it. Over time, the paint began literally pulling off the top layer of stone.

We worked with the congregation, Plant Construction, and the structural engineering firm Wiss, Janney, Elstner Associates to establish a cohesive and phased project that would address the building’s seismic and restoration issues. Chemical removers and low-pressure water were used to remove the exterior paint. We also removed the stone patches and the loose stone underneath the paint, sometimes up to an inch thick. As the paint came off, we were able to see the many colors of the weathered Colusa sandstone — gray, green, pink, and brown. We left the stone bare, which allows it to breathe and is the best option for extending its life. Some of the sandstone removed from the parapet was stored offsite for use during future stone restoration, should funds allow.

Structurally, the perimeter’s walls are all brick, while the roof and the dome framing are steel. To reinforce the walls, a hundred vertical cores were drilled from the parapet down through the brick to the foundation level. Horizontal cores were drilled as well. Into each of these cores, the contractors inserted a steel rod and filled the rest of the space with resin grout. A reinforced concrete bond beam was added inside the parapet coping to tie all the cores together. Strengthening the interior structure involved adding rods to tie the floor and roof joists to the brick walls. 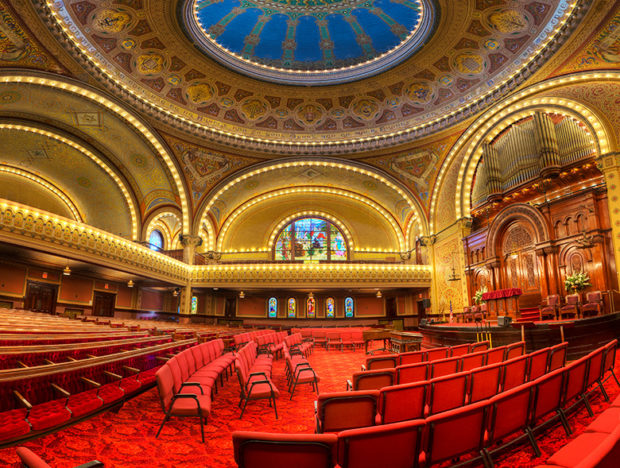 Some sleuthing was also involved. We worked with artist Beate Bruhl to restore stenciled decorative painting on the interior walls and ceilings in the areas that had been damaged by water intrusion over the years. In some areas, original stencils were discovered under layers of paint, knowledge that can inform future restorative work. On the exterior, we sampled the various painted surfaces to determine by analysis original paint colors on window frames, doors, and other façade elements. Those colors were then used to return those elements to their original appearance. The colors were exciting to see, as they were a fabulous match to some of the natural colors in the Colusa sandstone.

Another item that wasn’t originally part of the project was the return of the original wood entry doors to the sanctuary building. After having been relegated to the basement for more than 50 years, the doors were brought back as a prominent visual symbol of the restoration. The doors were upgraded to meet current code and refinished to match their original appearance.

We are currently working with the congregation to replace the original 1905 carpet with custom woven carpet to match the original. We found evidence that the sanctuary carpet is original to the building by reviewing congregational records from 1905, currently stored in the Magnes Collection of Jewish Art and Life at UC Berkeley’s Bancroft Library. There we found an original 1905 receipt for the carpet, carefully filed in the archives. The receipt gave us the name of the mill, which matched the weave mark on the back of the carpet.

The first phase of construction began in 2010, and the congregation moved back into the sanctuary in March 2011. The capital campaign for the second phase is underway. This phase will include reinforcing the sanctuary dome with a system of wire tension ties in the attic. Also, four large concrete buttresses will reinforce the north side of the building. This is the biggest architectural modification to the building, but not too visible, as it is located in a narrow midblock alley on the north side of the building.

Most folks who pass the building won’t know anything was changed. It will look like the beautiful historic treasure it has always been. And as much as we like to get attention for our work, that’s the way it should be.